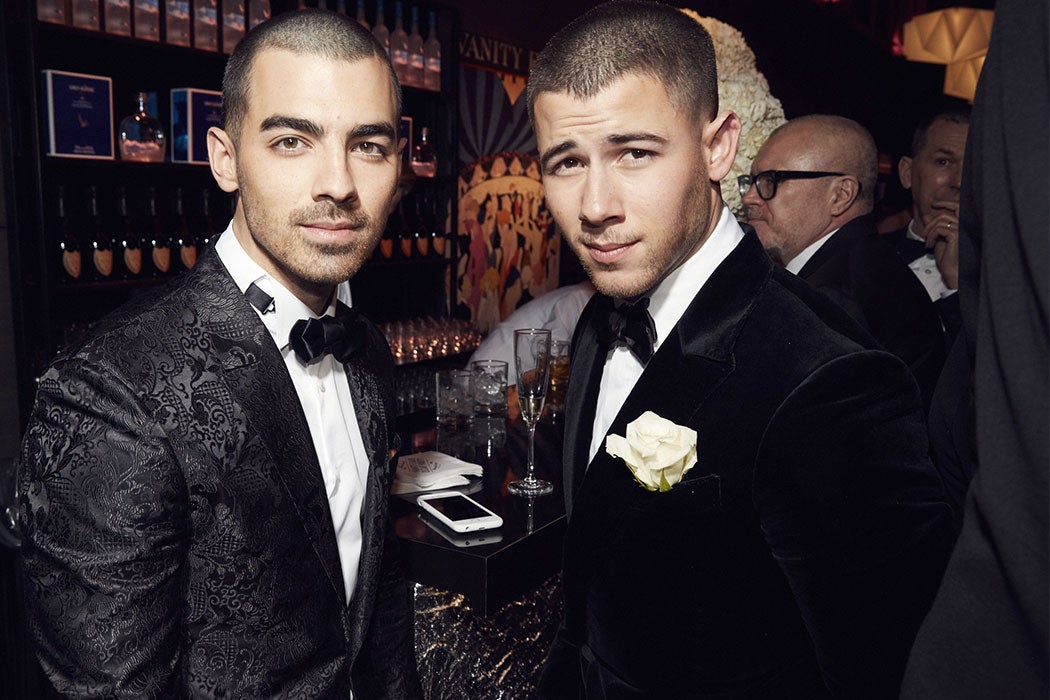 After one of music’s biggest award shows; the Grammy’s, we are switching gears this week to focus on one of the most important nights for our other celebrity halves, the movie stars. Instead of talking about who is wearing whom and who looks the best, let’s discuss this in more detail and see why these men made it onto our Top 10 list.

1. All clad in Chanel. Pharrell Williams is currently wearing our top favorite look for this red carpet event, a classic, well-fitted, Victorian-inspired waistcoat cropped at the front for his slimmer stature. The outfit overall is well-styled with extra attention to details from his silver flower brooch to layers of black pearl necklaces for some added mixed media to his sleek outfit, even down to the decorative buttons’ shape. 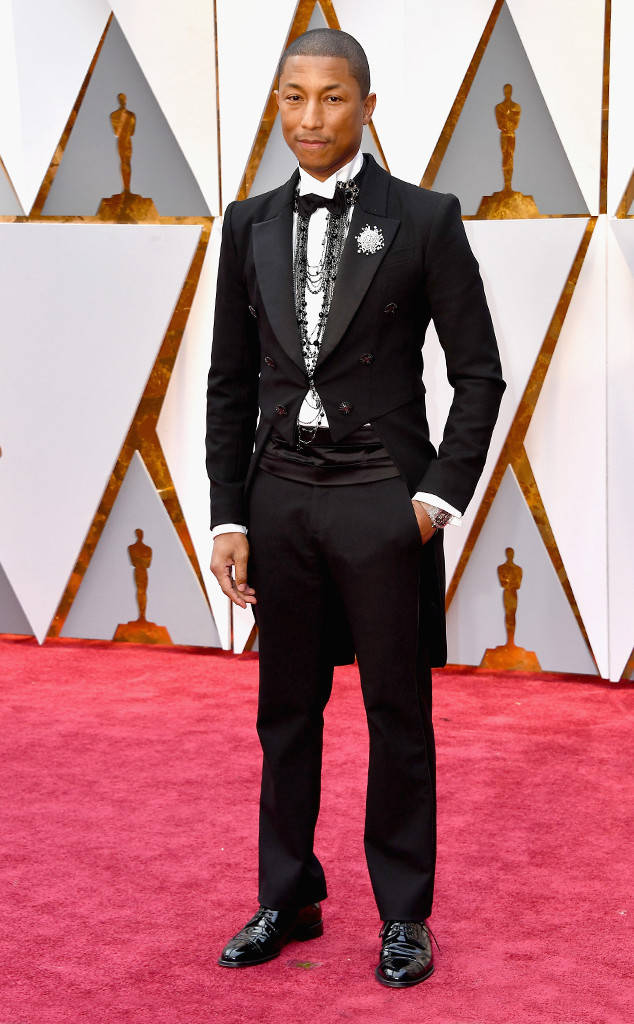 2. Despite how simple Jamie Dornan’s Hermes red carpet look is, we believe he deserve the number 2 spot on our list because not only is he wearing something other than a black tuxedo; which the ivory color is great for his skin tone, he is also spot-on with the jacket’s wider peak lapel style that perfectly complements his tall and muscular physique. 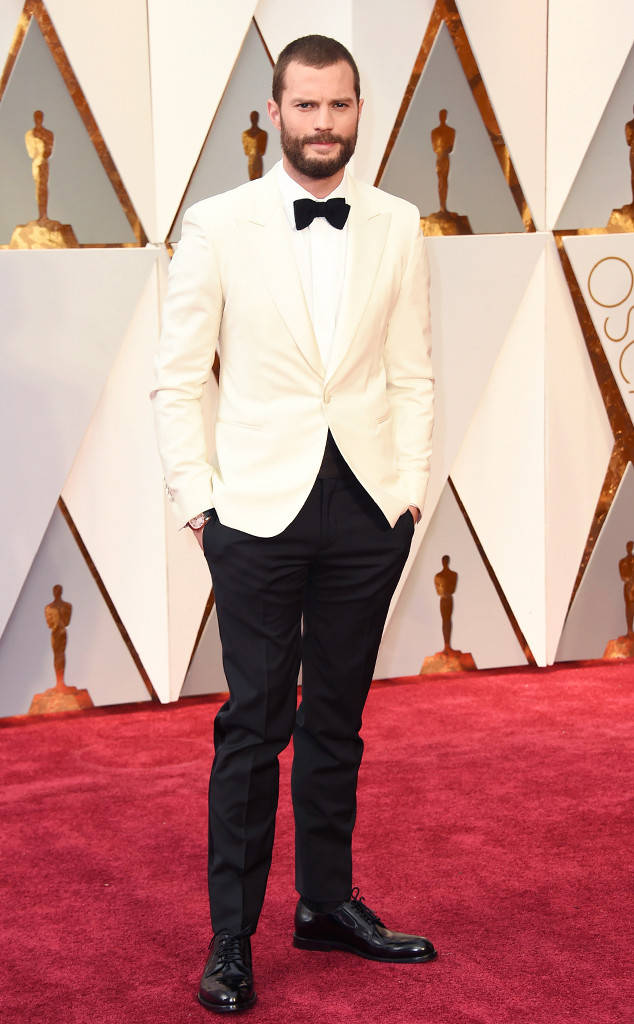 3. Another one of our favorite red carpet look, Ariz Ahmed in a royal blue Ermenegildo Zegna Couture tuxedo. Bold choices seems to be landing themselves to the top of our list! What can I say? The color choice is great especially against the red carpet, his pants appropriately graze above his shoes without any breaks, and his sleeve length is long enough to show a portion of shirt’s cuff. Ahmed also opted for a peak lapel style jacket despite of his height; standing at 5’8”, he was able to make the jacket work by reducing the lapel width so it does not overpower his appearance and gave an illusion of a broader shoulder. 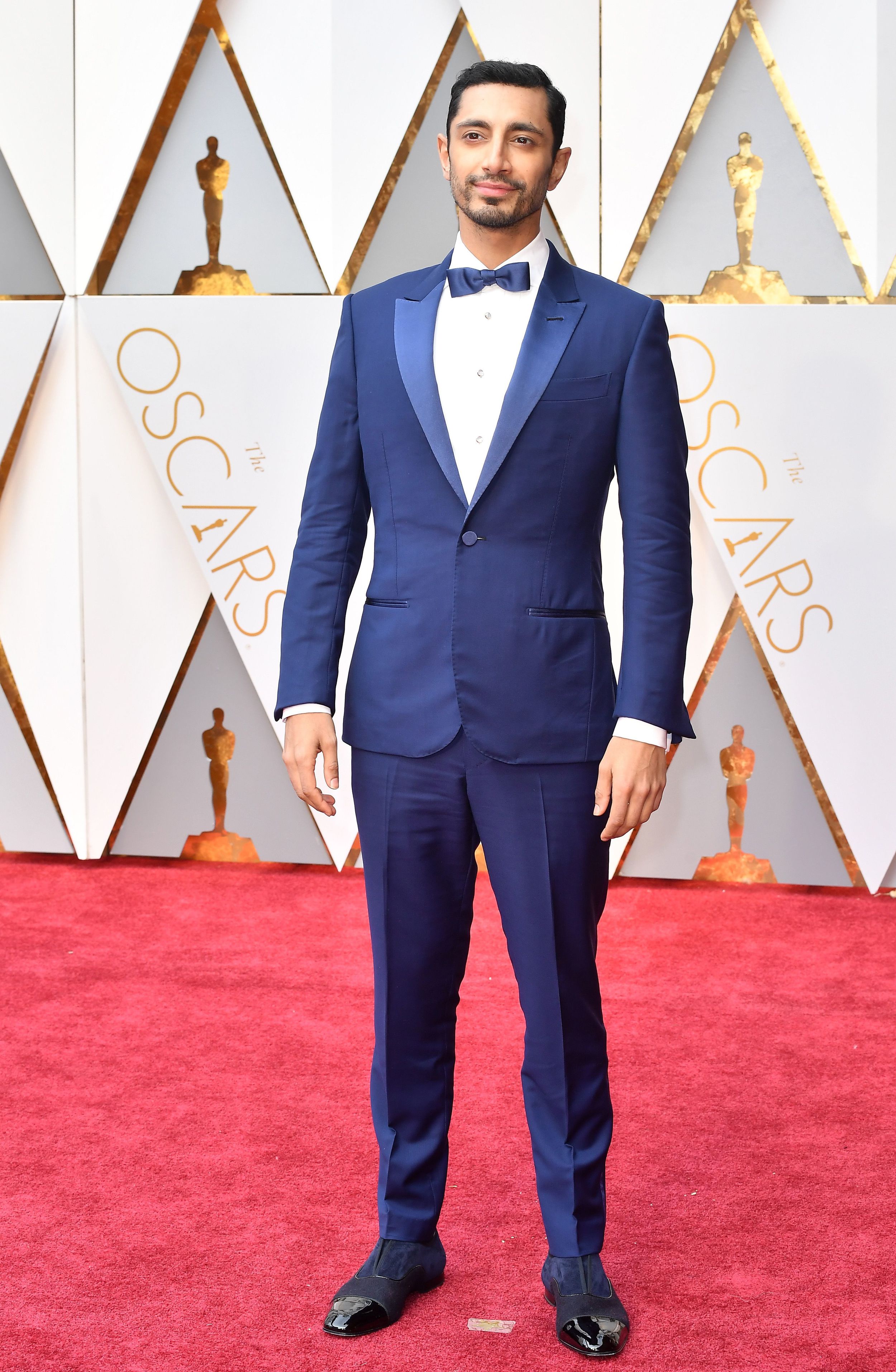 4. Remember those bad prom slide shows with guys in outrageous and overly ruffled button downs you would always see while searching through the internet? Well this outfit will most likely not be shown alongside those photos. Number 4 on our list is Ryan Gosling in a black Gucci shawl lapel tuxedo and softly ruffled shirt by Anto. Despite how muscular he is in many of his movies, this La La Land actor is considered to be more on the tapered side due to his narrow shoulders. The shawl lapel is a classic lapel for most face shape and is perfect for Gosling’s famous “hey girl”/boyish appearance that we all know which made his ruffled-front button down quite youthful. 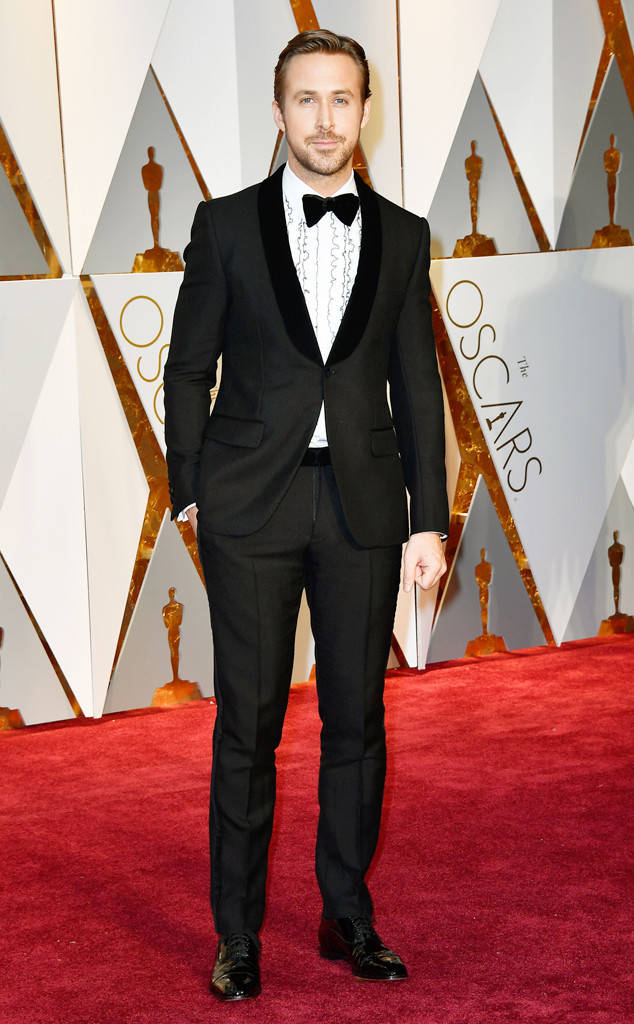 5. Finally, a velvet tuxedo jacket without a huge amount of creases and terrible back-flash in photos! This Red carpet look of Luke Bracey in Salvatore Ferragamo is number 5 on our top 10 list because we rarely see such a well-tailored velvet anything due to how difficult the fabric is to work with, almost every seam will cause a ripple in the fabric unless it is made and pressed correctly. The contrasting shades of black and mix of multiple textures gave the outfit more depth and interest. 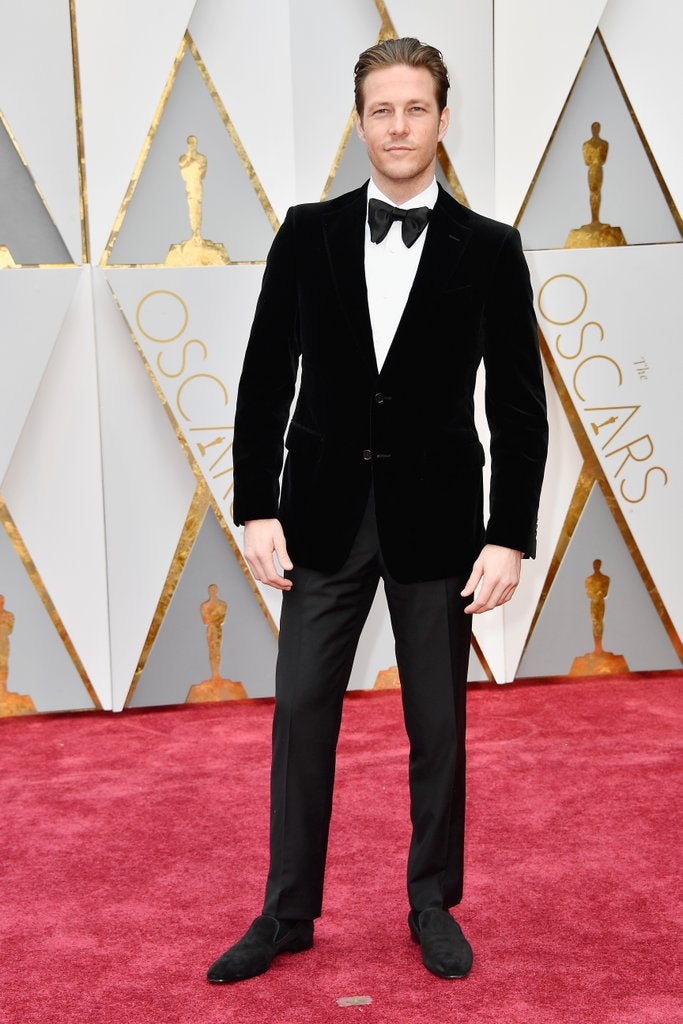 6. A definite trend to invest in for yourself if you are in the olive to darker skin tone range, lighter and neutral color tuxedos especially in slight off-white. Try going for a warmer shade of white with less blue undertone, which is what our actors are going with, it screams less prom and more luxury. At number 6 on our list, David Oyelowo is wearing a well-fitted ivory tuxedo by Dolce & Gabbana with a contrasting shawl lapel that nicely frame his face and again, great for his body type. 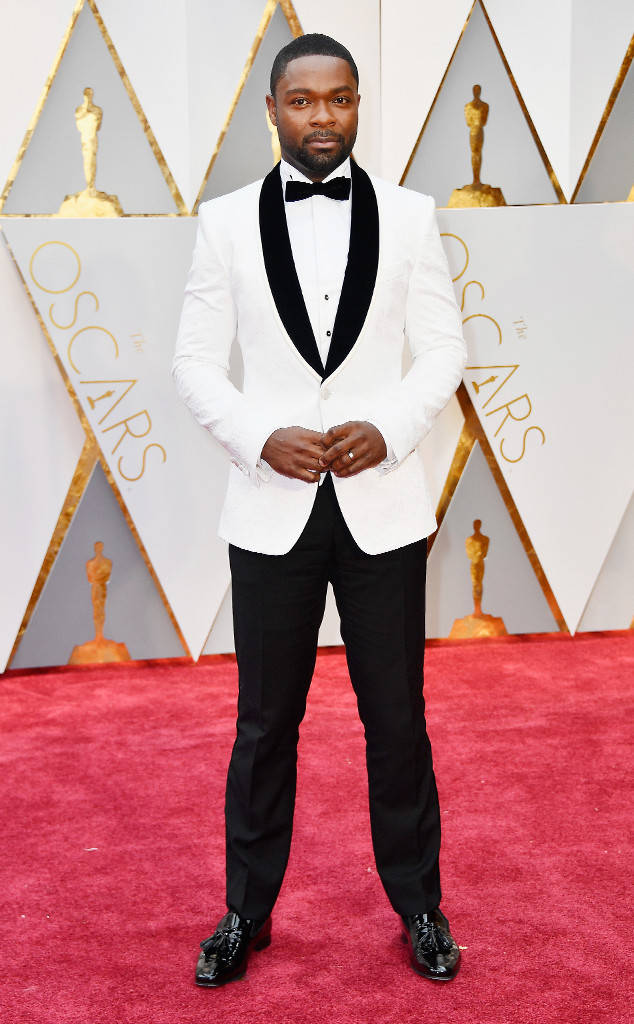 7. Lucious Lyon from the highly anticipated series, Empire, is making an appearance on the red carpet tonight at the 2017 Oscars. Many of you are probably wondering why a silk robe is being featured on this top 10 list. Terrence Howard is sporting a classic refined look of a smoking jacket, by La Perla, from the gentleman’s club where mahogany tufted leather sofas and expensive cigars are necessary while membership is highly exclusive. Despite this being such a classic look, it will definitely be more favorable towards the fashion-forward crowd due to it being on trend with the current pajama/sleepwear inspired pieces from many Italian designers. 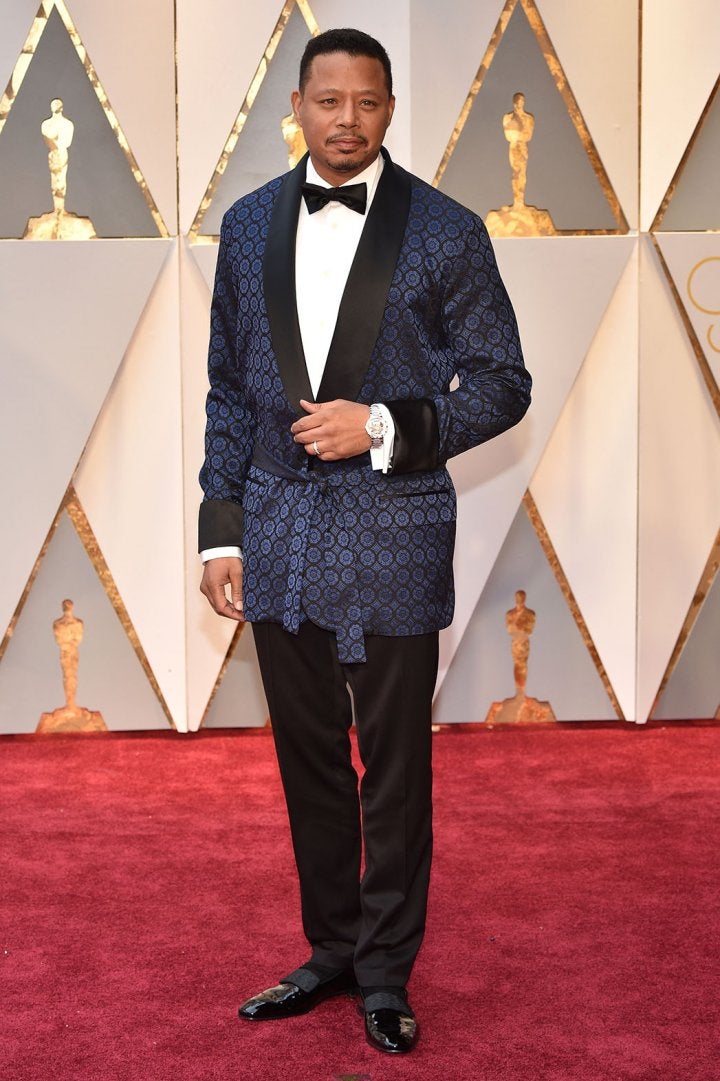 8 & 9. Nick and Joe Jonas definitely captured our excitement with these two handsome tuxedos both by Ermenegildo Zegna Couture which landed them in number 8 and 9 spots of our top 10 list. The silky black jacquard fabric definitely made Joe Jonas’s outfit stand out from the rest of the tuxedos due to the illusion of depths coming from multiple yarn shading/texture, a look of understated elegance. Nick Jonas on the other hand is wearing our favorite fabrication, velvet in double-breasted tuxedo style; a classic Hollywood glamour. Despite how muscular he photographed on the cover of Men’s Health, Nick Jonas is only 5’7” which puts him into the more tapered and compact category of body types and double breasted style give smaller men a more statuesque appearance, the masculine version of an hourglass shape, when fitted correctly. 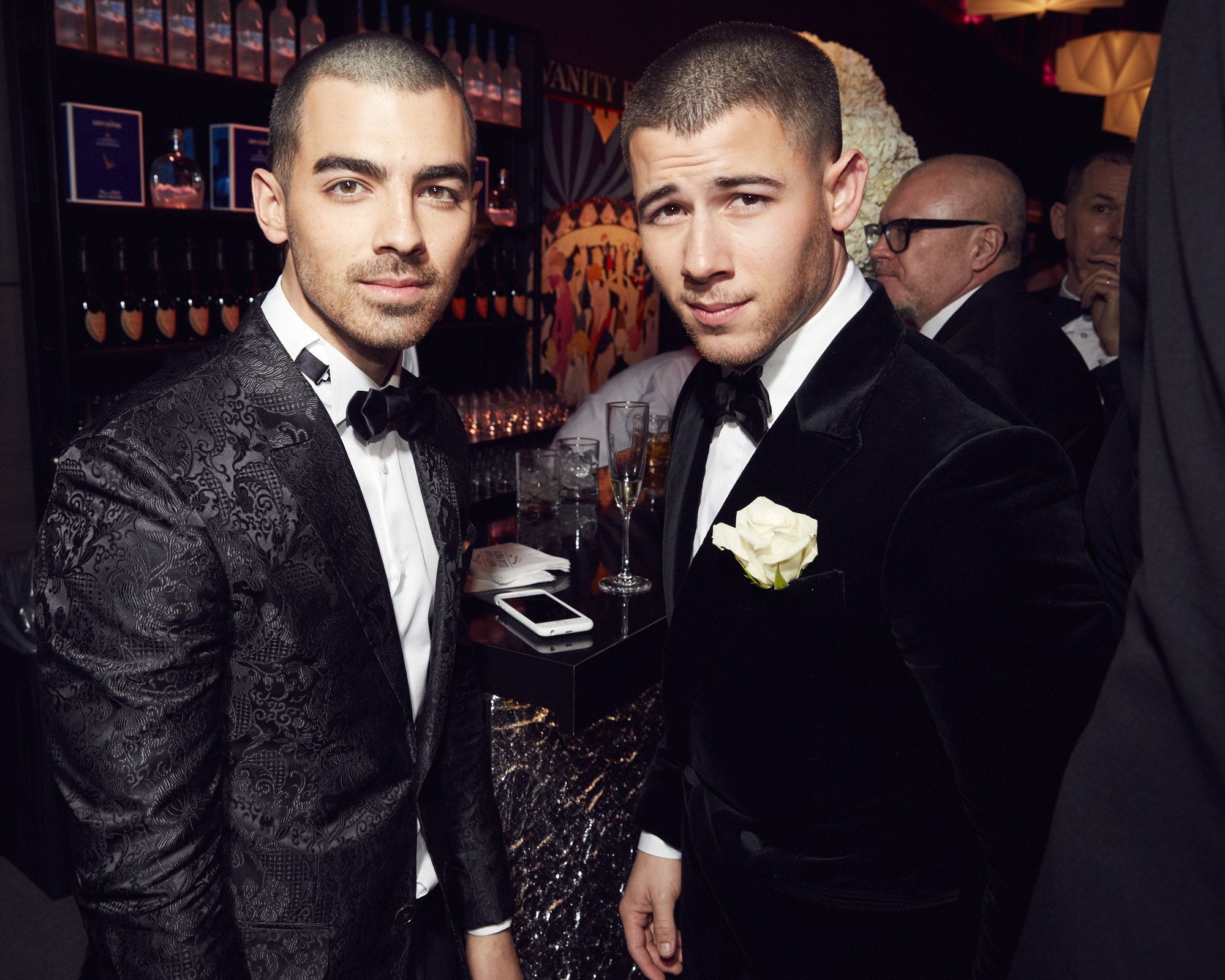 10. Tom Ford has always been the preferred designer for James Bond due to the classic definition of masculinity and sexual elegance his suits exude. Despite how exciting that might sound, it actually is quite difficult to conquer the Tom Ford suit due to their cut and shape being catered towards the more athletic demographic. With broader shoulders, extra room throughout, and longer bodice measurements, it is definitely not for everyone. Despite the inherent obstacles to wearing a Tom Ford suit, Andrew Garfield undoubtedly wears it quite well, despite his slimmer physique, which transforms his boyish personality to that of a more refined gentleman. 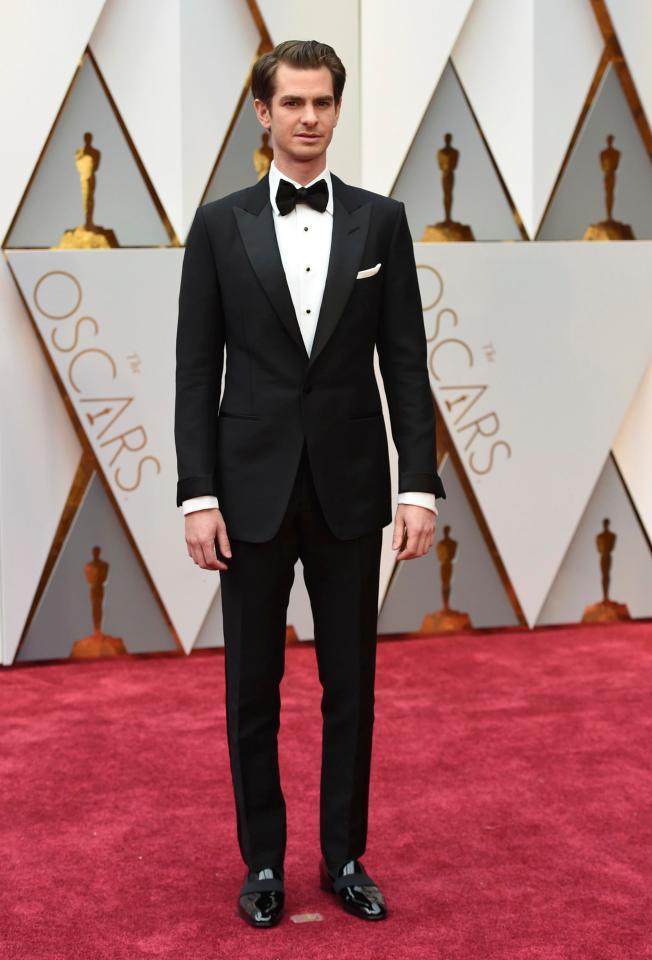 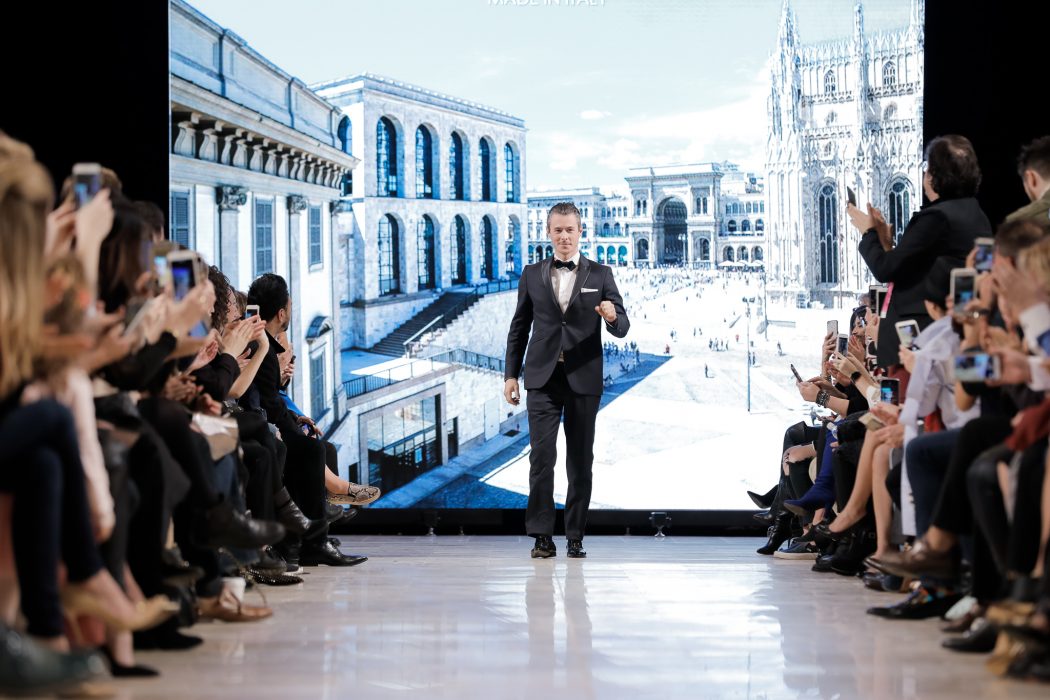 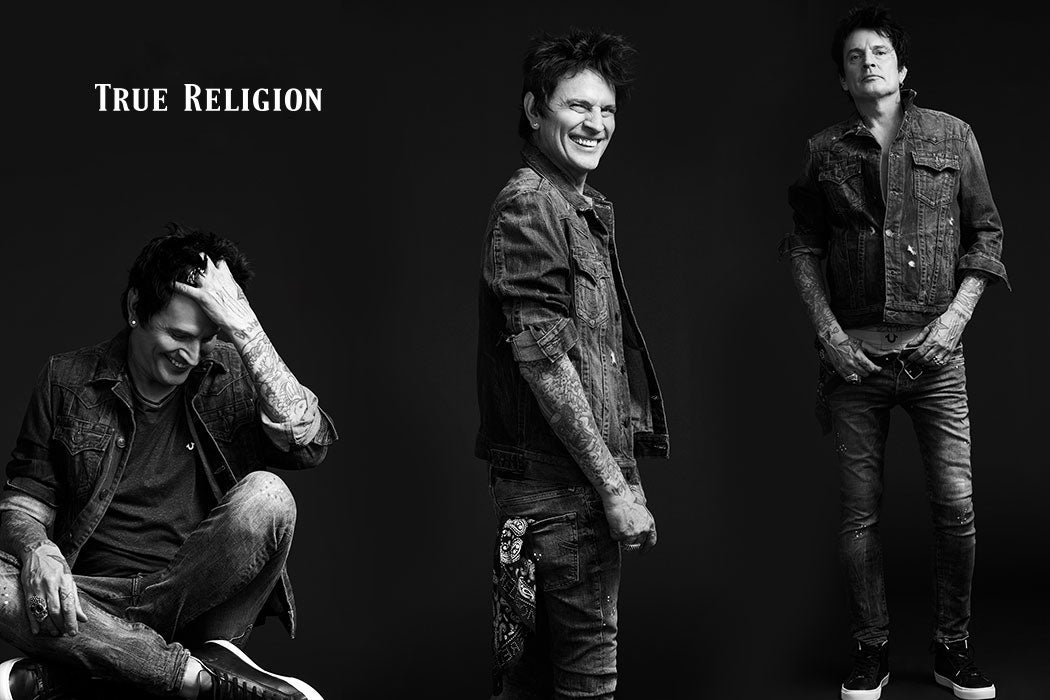 True Religion Announces Their 2017 This Is True Brand Ambassador