A few months ago in New York, Shai DeLuca found himself mingling with a group of marketers, gadget enthusiasts and other guests as Samsung introduced one of its latest flat-screen TVs. The device itself wasn’t much to look at — in fact, it was specifically designed to blend into the wall when it’s not in use. For DeLuca, it marked a turning point — not just in terms of electronics manufacturing, but the priority given to the kind of work he does every day.

“They understand what we have been saying forever, which is that we have to figure out a solution to this black hole on the wall when the TV is off,” he says. “You really understand how important interior design is when a company like Samsung goes to that kind of effort.”

Making an effort is something DeLuca knows a lot about. Besides running his own eponymous interior design firm, he serves a recurring role on Toronto’s Cityline TV program, where he provides advise to homeowners and educates the masses about what it takes to transform a space. Next up, DeLuca will be bringing his expertise as a contributing editor-at-large to SWAGGER — another sign that interest in interior design is expanding beyond its traditional audience to affluent young men.

“A lot of men used to say ‘Oh, that’s my girlfriend’s area, or my wife’s area. Women are no longer willing to say that’s their role any more,” he says, citing his own sister as an example of a woman who decided to stop seeing a guy after she discovered his apartment was a slob’s haven. “They expect their men to take care of their appearance and their home.”

Of course, there’s a difference between figuring out what kind of clothes suit your personality versus expressing yourself in furniture, art and other accessories. DeLuca’s approach begins two weeks prior to an initial consultation, where he encourages clients to stock up on some magazines — they could be interior design-related, but not necessarily — and rip out images that speak to them in some way.

DeLuca’s own personal sense of style and taste came much earlier, and more organically. With a father who worked in the beauty industry and a mother who worked as a homemaker, he says both of his parents were creative on how they chose elements to make their house welcoming. His work ethic and methodical approach to running multiple projects at once, meanwhile, may have been nurtured in an unexpected place — spending fourteen years abroad four of which he served in the Israeli Defence Forces (IDF). While he admits that technically any interior designer living in Israel would have had to complete their mandatory service requirements, it was an experience that has continued to have an impact on his approach to business.

“You learn how the importance of planning, the importance of getting things done on a timeline, (thinking about) what other people need,” he says. “There’s not many things in IDF training that I can’t somehow apply today.”

Working in television, meanwhile, has allowed DeLuca to help those who might not otherwise afford an interior designer. Working one-on-one with clients, however, often requires a mix of soft skills, he says.

“When you hire a designer, you’re usually getting a marriage counsellor, a family planner, and so on,” he says, adding that the level of care and attention continues even after the official project end date.

“I follow up a month in . . . The only way I believe that we can truly say, ‘Yes, we are done’ is after the client has lived in the new space and we reconvene and I can ask, ‘What do you feel?’ and they can say, ‘Yes this perfect,’ or, ‘we need to change this.’”

“When they close the door, it’s their refuge. A good interior designer will respect that,” he says. “I’m here to help achieve the look you’re looking to get for your home. I will never tell you what you want. We’ll work and we’ll walk there together.”

Designing The Ultimate Office For Your Business 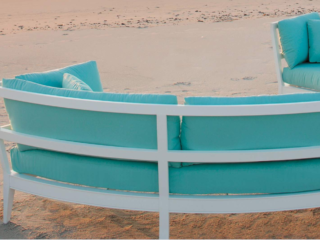 Top 8 Minimalist Desk Setup Ideas from Influencers Around the Web

In and Out: 6 Man Cave Ideas for Indoors and Outdoors

A Vintage Look for the Kitchen with Farmhouse Sink

Roller Shades Or Cellular Shades – Which One Is Better For You?